Nice. I'll be surprised if this doesn't get mentioned. I like the idea, and unlike others I thought having uncomfortable key layouts made the game seem more "wild." My only nitpick is that the character acted weird on slopes sometimes. For example, I was able to jump super high if I timed a jump right at the end of a slope, which made the forth level really easy for me. The branching pathways is a really nice touch though!

I really wanted to put more time into Physics/Movement because thats what a platformer is all about,
I stuck with what I had and wanted to 'tidy it up' at the end, but there wasn't enough time left.

The higher jump part was actually something I had a lot of fun with during testing.
While sliding down a slope, quickly move the other way, jump and change directions mid air. Felt like an out of control speedrunner, so I just left it in :)
Didn't notice it gives an unfair boost at one level.

It's barely a boost in the forth level, I just felt a little bad that I stayed on the higher path the entire time through-out the level.

Even though the jam's results have been shared, I still think this game was a lot of fun :)

Hey! Like the game! I read that your keyboard is a different layout than QWERTY. I didn't realize this until after I played the game, but I actually enjoyed having the keys different. It made it more difficult to move when a "Move right" key was to the left of a "Move left" key. So, perhaps--as Bob Ross would say--there was a "Happy Accident".

The music and graphics choice was nice. I liked how smooth the character moved. I also liked that if I was moving, I'd stop mid-air if the key changed on me. I could totally see something like this being used to teach students how to type! If you had the system where moving left and right keys were based on which hand was on the keyboard, they could practice where the letters are.

Some mentioned switching controls mid air was annoying,
Might just be that the game doesn't provide any feedback when the buttons are changed or right before they change. Will dig into this

thanks for the feedback

Perhaps some audio feedback like a sound effect that plays when you hit the wrong key? Honestly I kind of liked how I all of a sudden lost control and couldn't move in the air, so it's probably personal preference.

Like it - thanks for making it. My brain got very confused when having to press a key on the right to go left, I guess that was the intention. A mid-level checkpoint system might also have been good :)

Well, to be honet, that wasnt really the intention.
I forgot most people use the QWERTY Keyboard layout,
I use the german layout (QWERTZ) where the Y key is next to X

Which means, if you set your Keyboard to a german layout,
you dont get a left key that is right of a right key

Hope that wasn't too much of a problem

Ah fair enough and thanks for the interesting explanation! It just added to the sense of 'out of control' so no bad thing

Looks really beautiful and the concept is great! However it was kinda frustrating to play because some awkward key combinations where hard to grasp and the reward of getting it right wasn't so big (i can just run right and eventually reach the end, at least in the first two levels). I understand this is the idea, but maybe adding an additional mechanic or challenge in level design and polishing the control response a bit would make it more fun. For example I found trouble jumping when standing on slopes. But very nice work!

Yeah,
I had a few ideas for that, just not enough time to implement them,

or longer levels with movement in both directions
like I tried with the 4th level.

Fun concept, having to switch up keys definetly gets out of control!

Maybe i didnt get that far (a lot of games to test quickly) I would like more gameplay that makes me have to move towards the left, since I never had to go left, all i had to do was to learn the next key to the right. Having to go left to make it up higher ledges may be a way of improving on this. Double the control trouble :)

My game should be attached below or else its called Drone. Hope you enjoy.

Thanks,
I tried to have more movement in both directions in the later levels,
the first two were mostly tutorial and making you comfortable with the controls,

The third level was probably the first point, where I tried to force the player to use both directions,
Also the idea with the spikes were to have the player advance more slowly and hopefully use the left key to slow down the movement a bit.

Very nice approach to the theme! My main bit of feedback would be that the spikes can sometimes be very hard to see, and it might be cool if the controls degraded the more they are used rather than just being on a shared timer

If you want to play my submission to the jam, it can be found here:

Interresting Idea, might get back to it,
The mistake I made, was doing most of the level testing without the deco/Background objects, only the Ground and Gameplay objects,
didn't notice how hard the spikes stand out with all that 'polish'

Thanks for the feedback, will defenitly check out your game

Reply
MASTER OF THE TIDE2 years ago(+1)

Reply
The Seahorse2 years ago(+1)

You can play my game  here

Hope not too frustrating,

I tried to increase playtime by forcing the player to advance more slowly and look out for spikes, while also making him move left more often, not just hold right and run though.
I might have overdone that a bit.

Will check out your game, thanks for the feedback

Clever interpretation of the theme! I really liked it!

a little floaty and unresponsive sometimes however, overall a great concept. great work

Thanks,
Could you elaborate on the floaty part? I used Cinemachine and tinkerd with the settings until it felt good.
But I did most of the testing in Editor, not much in OpenGL in the Browser,
I think that might cause some unsmoothness

If I'll ever continue with the game, I will definitly make it a standalone

I like that you clearly showed what the next and current control scheme would be. I've seen a few similar games, but they didn't show when and what the controls would change to next, so... props!

I did get stuck in the terrain a couple times. Might want to look into some unity platformer tutorials -- I recommend this and this video :)

Thanks,
may I ask where you got stuck?
while testing the only point where I got 'into' the ground, was on platforms ans I still could run left, right and jump.

I havent tested  every corner, so there might be some points where you could get stuck. 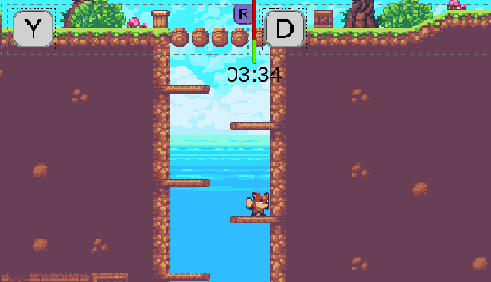 Doesn't really look like it, but in the below screenshot I was stuck in the wall. I think when I played before I got stuck jumping up some bridge and got caught on an item that was on the bridge?

That point should has a red key, if I remember correctly,
could be a problem because of key and platform

I will probably change the character controller and physics if I ever continue on the game, so I'll leave it for then.

This idea.  This is the coolest idea.